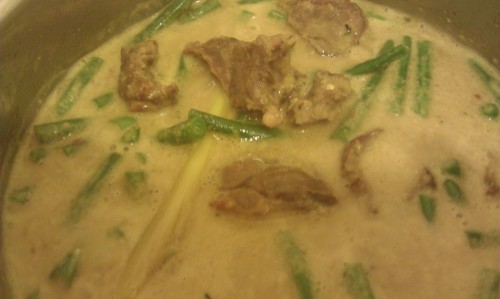 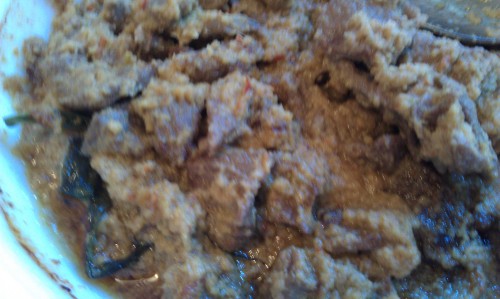 Traditionally, the Malay rendang is cooked in a wok.  The dish starts off with the meat and blended spices covered to the brim with coconut milk and it is then cooked slowly until almost all the coconut milk has dried off when the “kerisek”  is then added.  Kerisek is basically grated coconut which is toasted until golden brown then ground into an oily paste. It can be made at home or bought ready made.  Kerisek give rendang its unique fragrance and flavour.

However, when you are cooking rendang on a stove where the wok won’t sit very well, it can be difficult. So I have made some adjustment to the cooking technique. It reduces the volume of the coconut milk and it involves less stirring so you have more time to tend to other dishes. Not only that, you are guaranteed with tender melt-in-your-mouth juicy meat. Because I was cooking for an English family here, I have reduced the amount of chillies considerably.

I am sorry the photo above is not picture perfect but we were too hungry to wait.

half a can of coconut milk

Heat the oven to Gas mark 5.

Slice the meat into small bite-sized pieces. Next, make the kerisek. Chop the creamed coconut into pieces and spread them into a layer on the  baking tray. Place the baking tray under a grill and toast the coconut until golden brown. Meanwhile, blend the shallots, garlic, ginger, lemon grass, galangal and chillies with a few drops of water until smooth.

Heat the oil in a saucepan. Fry the blended  spices. Add the curry mix and stir well. Add the meat and stir. Next add the toasted creamed coconut and coconut milk and bring to boil. Season well and taste. Now transfer the whole mixture into an oven safe casserole dish, add the kaffir line leaves and turmeric leaf. Cover and bake for 35-40 minutes.

Verdict? The in-laws really loved it they had seconds. Finger lickin!

My mother-in-law gave me some leftover sirloin roast after a recent family dinner. I used it to make this salad just a few days before the new year.  It is incredibly quick and yummy but very spicy. If you are fearful of chillies, reduce the quantity or use the sweeter variety and don’t  forget to remove the seeds and pith. Serve with warm rice and green salad.

250 gm of cooked beef  ( I have used roasted beef sirloin)

First make the dressing. Mix all the dressing ingredients well.  Place meat, shallots, tomatoes  and half the cilantro in a bowl. Pour over the dressing and gently mix. Serve with the rest of cilantro as garnish.

1 can of chopped tomato

Heat the oil on medium heat. Add the onion, garlic and ginger. Stir fry until soft. Add the chilli, paprika and cumin. Add the mince and sir fry till brown. Add the chopped tomato and kidney beans. Mix the tomato puree with a tbsp of boiling water and add to the pot. Season well. Stir and bring to boil. Turn the heat down, cover and simmer gently for 20 minutes or until the oil separates. Sprinkle the chopped coriander leaves and serve immediately. 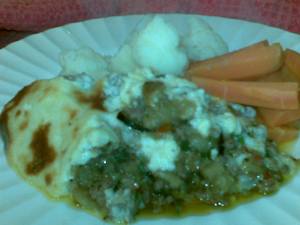 Inspired by James Martin. I served it with steamed vegetables. This portion serves 4 but it was so good we had seconds and finished it all just between the two of us.

1 aubergine (sliced and fried till brown)

half a chicken stock cube

Heat the olive oil. Fry the sliced aubergine till brown. Drain on kitchen a paper.

Next fry the onion, garlic and chilli. Next add the mince and brown. Add the tomatoes, chicken stock and spices. Season with salt and pepper. Add the chopped mint. Pour into a casserole dish.

Next the cheese sauce. Melt the butter. Add the flour. Stir. Gradually add the milk and keep stirring to remove any lumps. Gently simmer for a few minutes until you get a smooth roux. Add the cheese and seasonings. Take the pan off the heat and add the egg. Stir and pour over the mince. Bake for  15 minutes at gas mark 7.